Yes, the holiday break is over, and all excuses about "being away from the internet" or "being too sleepy/full/hung over to make my picks" are now invalid. 2011 is here, the Canadian Juniors are poised for a semi-final game against the USA, and the VWXYnot Hockey Pool standings have made their way over here this week.

Overall standings for the past three weeks. I'm not winning. 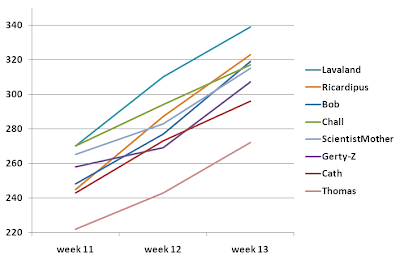 Maintaining a convincing lead is Lavaland, even though week 13 wasn't exactly a stellar performance (tied fifth or second-last for the week, depending on how you look at it). Bob has catapulted from fifth to third, and I've clambered up into second overall. There's a real dogfight for third through fifth developing, with Bob, Chall and ScientistMother separated by only four points.

Looking over these three weeks of results, I'm also giving myself a "hard charger" award for the steepest slope. Hey, it's my blog, I can do what I like.

At the bottom end of the standings, Gerty-Z's excellent week has meant a jump from seventh into sixth, while Cath went in the opposite direction. Thomas is still bringing up the rear, although trending in the right direction. The biggest weekly points total goes to Bob with a whopping 42. Gerty-Z also had a convincing week with 38, and I was third with 36. Thomas has improved a bit, Lavaland had an uncharacteristically poor week, and Chall and Cath are tied for the limpest performance.

So there you go. I apologize for the ugly graphs, but the deadly interaction between Excel, PowerPoint and Blogger is at least partly to blame.

Me too. Wish I'd paid more attention during the first few weeks - heck, I could be winning by now!*

I totally suck at the moment...

I don't care! The Canucks are top of the whole league, and that's what's really important!

Hooray for 2011! I'm glad to see that my near-random "method" for choosing did so well this week.

And congrats to the Canucks. My Avs are trailing by quite a bit, but I'm hoping that they will be able to amass enough points to make the playoffs.

What the heck! Am I the only one still recovering from new years?!! Freaking forgot to change my picks bc I was sleeping and watching the juniors. Grumble grumble...

Ahhh! I'm stalling out! Flat spin on the horizon.