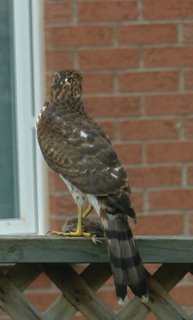 Look carefully, that's a dove it's snacking on.

Tentative identification of the villain is a female Northern Harrier, a.k.a. Marsh Hawk, Circus cyaneus, but it was a long way away and refused to turn around for a mugshot. The evidence is, however, compelling enough to clear the original suspect, an immature Broad-winged hawk, who was around last winter. He is now out on bail for his other crimes (trespassing in Canada when supposed to be overwintering in Florida, with malice aforethought). The score is, nevertheless, Doves 0, Hawks 1.
Posted by Richard Wintle

Here via Aunty m. We are misssing a hawk from Exmoor - could it be ours? Has it got a Somerser accent?

The hawk didn't hang around to chat, unfortunately, mainly because its greedy beak was full of dove. That would be quite the ridiculous migration though.

Do you have a high res photo?

black knight - thanks. yes, I've got a couple, but it was very far away (tiny, in the middle of the pic) so I don't think it'll be much better than this. I'll send you a crop of the high-res version soon(ish).

A micro-analysis of the current state of USA politics, I'd say.